How Alce Nero was created 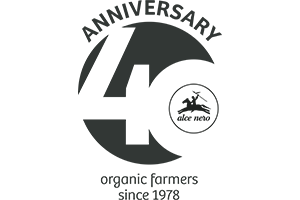 Our story begins at the end of the 1970s. It’s a multifaceted story about a grand and powerful idea: the concept of organic as being not only an end in itself but also a method; a means of joint participation in global change. In other words, the idea that agriculture and food create relationships and bring people together.

Both were cooperatives, meaning that ideas and people were more vital to their growth than any kind of financial resource. There were two areas of origin, the Emilia Romagna and Marche Apennines.

Bees were the symbol of the regenerative power of natural, organic farming represented the response to the distortion of our countryside and the food produced by them at that time. We had a single vision: that of a strong sense of responsibility towards the earth; of the land as a living, bountiful organism rather than inconsequential soil to be manipulated. This was combined with the idea that proclaimed organic methods as an agricultural and environmental practice which provides people with food and nourishment. It’s about wholesome and delicious nourishment which is good for us.

On the one side there was Gino Girolomoni. He was the first person in Italy to relentlessly state that organic means were an essential cultivation method and a veritable tribute to life. This is precisely why he founded the Cooperativa Alce Nero.

On the other side we have CONAPI, a consortium established by a few young beekeepers in the Idice Valley, close to Bologna, yet which went on in subsequent decades to bring together the best and most consolidated beekeeping experiences throughout Italy. In doing so, it fostered the extraordinary biodiversity of honey, provided by the flowers, together with protecting bees from harsh pesticides and herbicides.

The encounter occurred in the 1980s, yet the merger didn’t take place until 1999. A few years later, it developed into another new configuration, borne out of different production and commercial choices. Thus Alce Nero became a distinctive voice within the market, and one which went against the current. Our very logo is emblematic: It depicts Alce Nero (Black Elk), medicine man and Native American chief of the Oglala Sioux tribe, riding in the opposite direction, carrying his message beyond all borders and speaking of new, ever-possible concepts.

This is why we have striven to free the land from poisons ever since, striving to preserve its biodiversity and assuming environmental responsibility, which is in the making. In other words, it isn’t limited. Our farming partners are themselves the drivers of this change and the first to interpret our food. We made the choice to be the supply chain. We select the fields and the people. We take care of our enterprise, all the way from the land to processing, right down to every single ingredient, so that we can achieve authentic, organic produce. This is all done so that we can offer real, wholesome food, because your health is your wealth.

We are an open company undertaking an adventure — our adventure — and today we work on over six thousand hectares in Italy that have been converted to organic farming methods and which are still growing to this day. Our enterprise brings together more than a thousand Italian farmers and beekeepers, gathered under the umbrella of a group of twelve great partners; a group which is soon to be sixteen. To them we can also add our fourteen thousand small Latin American farmers, together with our processors, who act as the interpreters for our raw ingredients, combined with our cooks, storytellers and traders who, today, embody Alce Nero. They nurture it daily, and each day they drive it past the border, like a trusty steed.